Joyetech provided me with this sample device, but I always try to give a realistic review, usually after a week or two of daily use. The supplier never has any influence over the content of my reviews. Many review sample devices are early pre-production units, if I find serious problems when testing I report them to the manufacturer, this has usually resulted in changes being made to the product itself or the manual before release.

I try to give a “real user” review rather than delving into the numbers, others do that much better than I can. I normally use a well known premium e-liquid for all my reviews, it’s high VG, usually zero Nic and uses fruit flavourings with complex flavour notes, I know how it tastes in many devices and with varied settings, in that way I can judge how good a device is at releasing subtle flavours. It’s subjective at best, but that’s vaping.

Brief because the Teros One just works, I have had zero problems, no leaks, no gurgles, no spitting, no liquid in the mouth and no herds of Wildebeest following me in the street. Zilch.

The Teros ONE is smaller than the Joyetech Exceed Grip, which was also a problem free device, but equally powerful. Pictures speak a thousand words so here’s what the Teros ONE looks like. 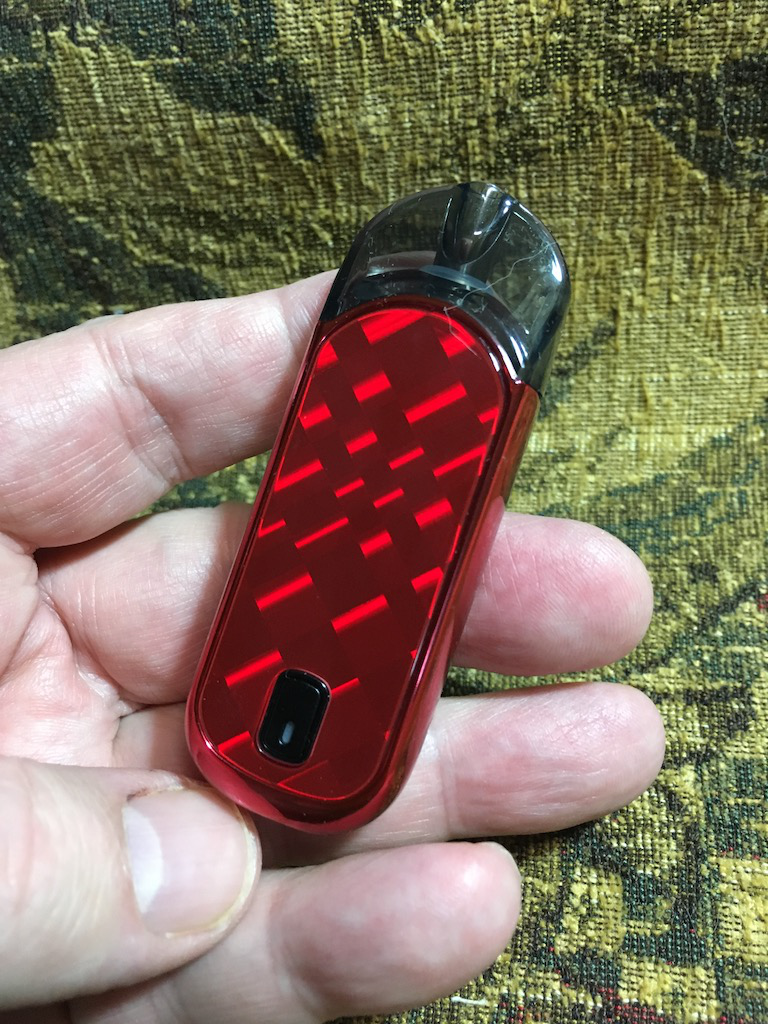 Sorry about that cat hair, whatever I do her fluffiness gets everywhere! 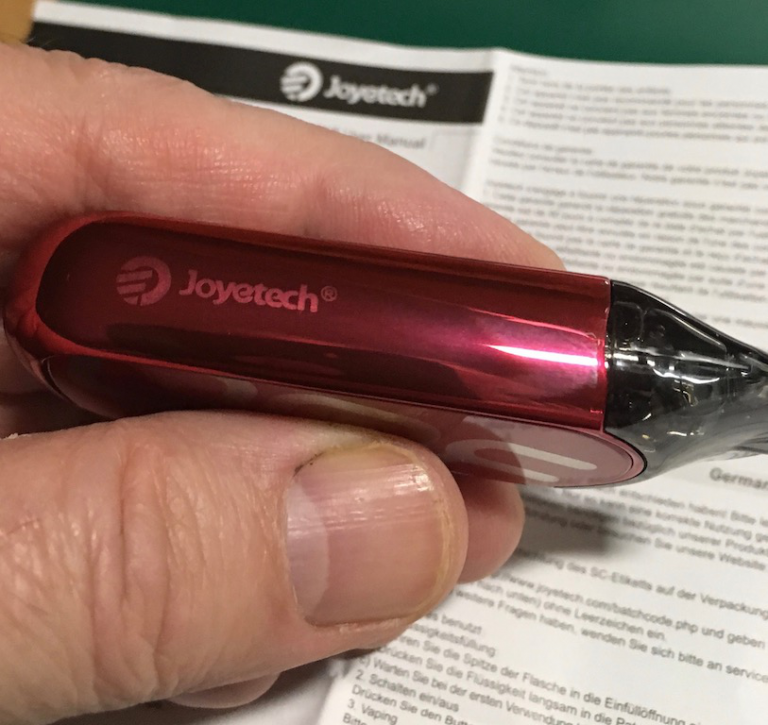 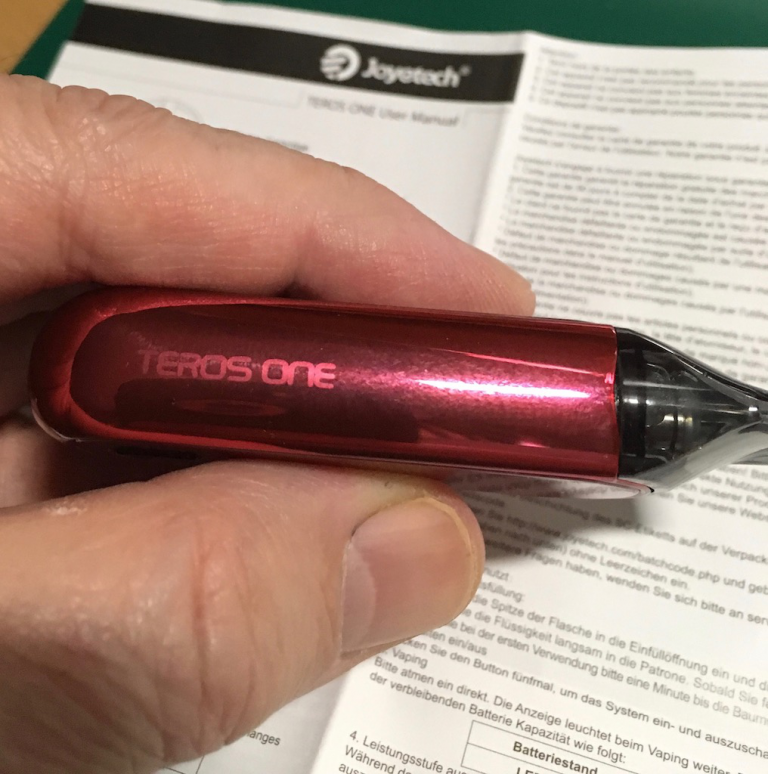 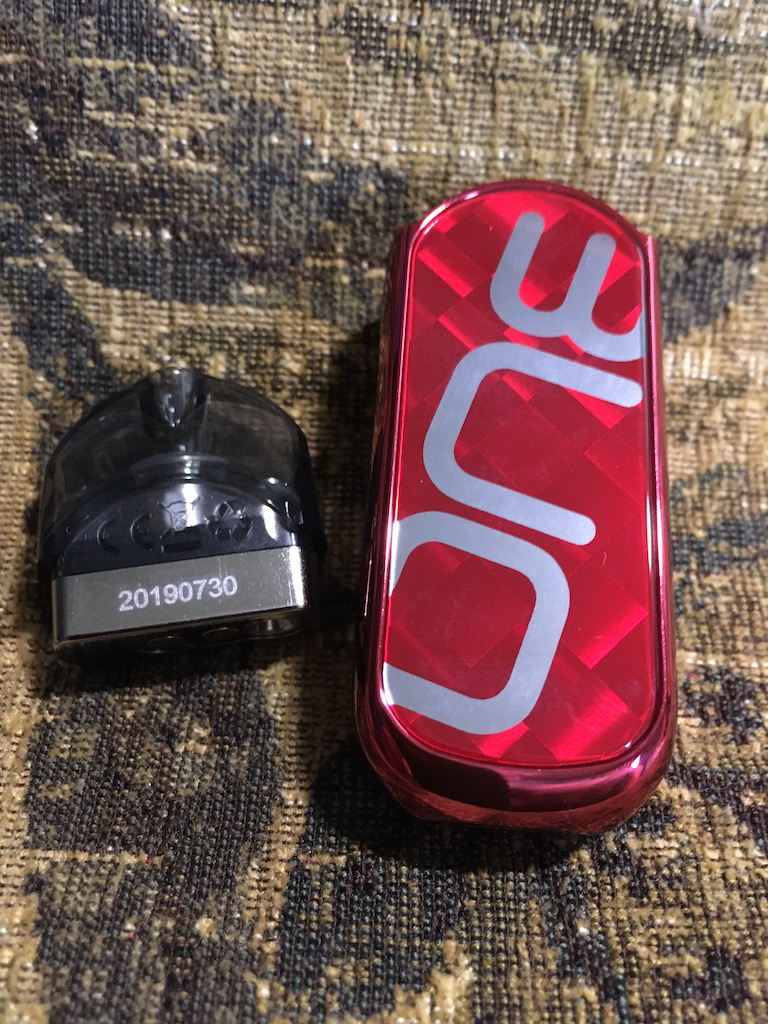 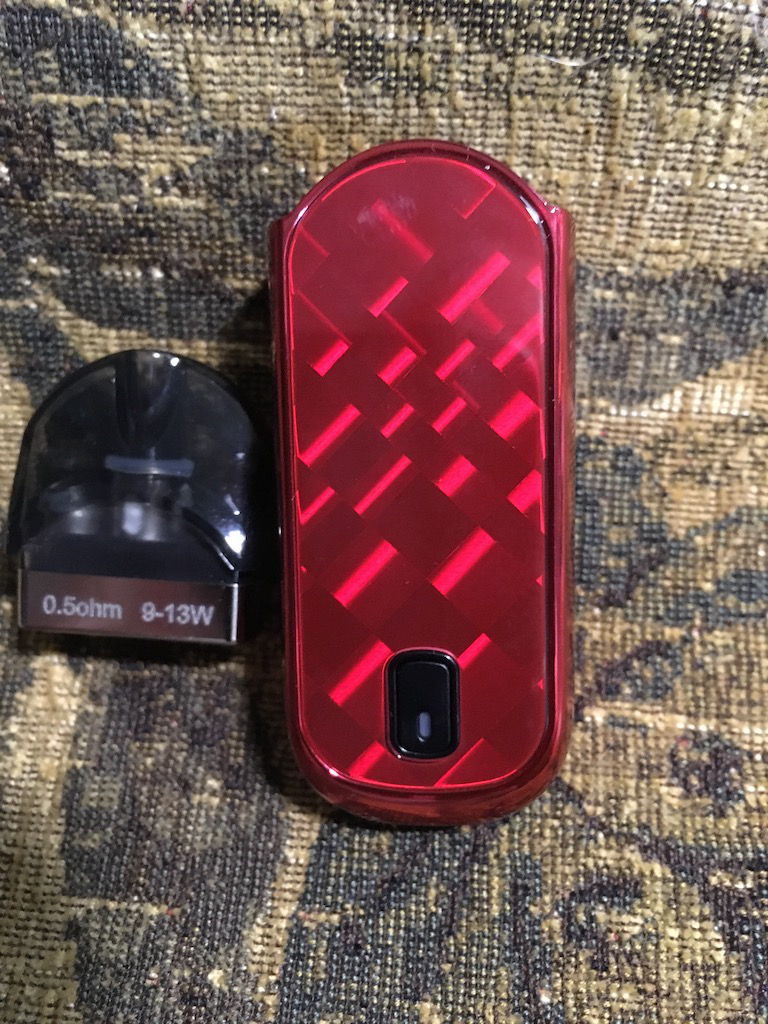 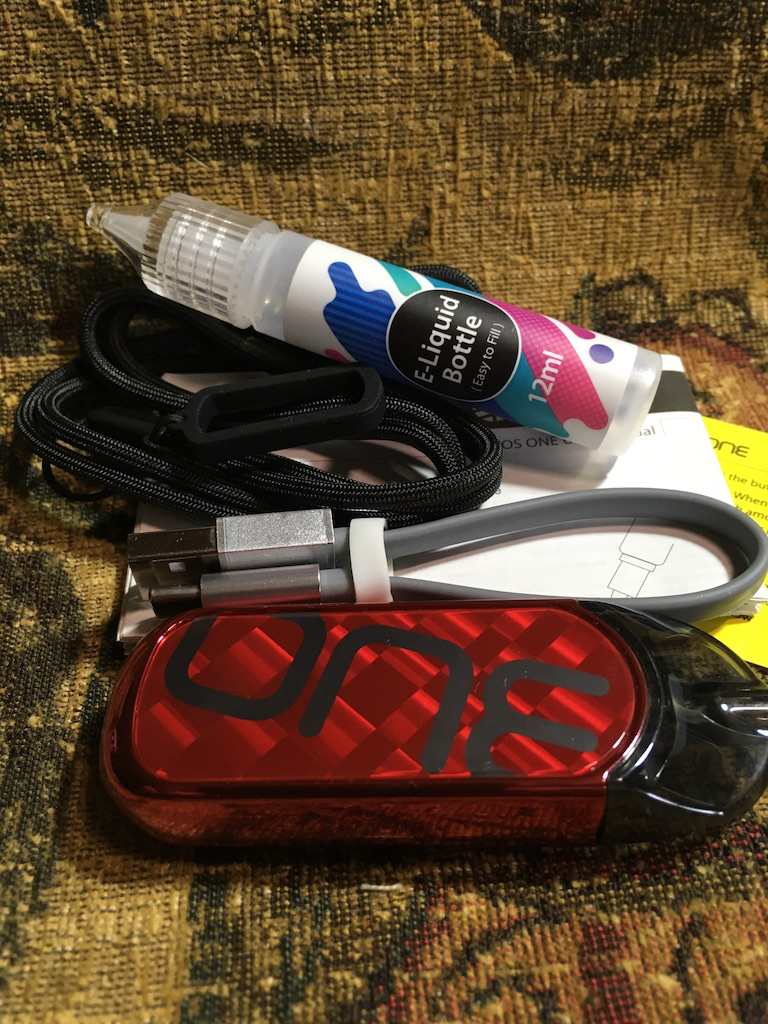 In the box – The Teros ONE battery unit, a pod/cart (wish the manufacturers would make their mind up so I could ..), a quality, short flat USB-C cable, a 12ml carry liquid bottle, a lanyard and the usual cards and manual.

It’s made from a glass material, the “Moussaieff Red” I received is a real light catcher and very attractive – and I usually like plain black or gunmetal. The colour name is from a 5.11 carat red diamond found in 1990 something in Brazil by a lucky farmer, eventually it was bought by a dealer named Shlomo Moussaieff, now you know.

There a small black button, it doesn’t rattle, on the front face with two functions, power on/off with 5 clicks ofc. With power on press 3 times to toggle between 3 power levels:

The reverse of what I would intuitively expect, red often indicates high, hot, on and so on… but it seems to be becoming the norm.

Described as childproof, this new system uses a push down valve to fill, on the left in the image above. It needs a fairly strong push with the bottle tip to operate. It works well, no leaks, not a trace, yay! Two gold colour battery contacts and the air pressure detection holes are visible in the image also. The cart is securely held in place with two small magnets.

The supplied 12ml empty bottle is a useful extra when out and about as it’s slim and tall and fills that cart many times. Useful if your liquid comes with a thin metal needle or a squeeze dropper too.

Note that the cart itself is slim owing to it’s elongated duck-bill shape with the coil and chimney in the middle, effectively dividing the liquid space into two with a small aperture for it to travel between the two. When I first filled it, the liquid seemed to stay on the filler valve side and I needed to shake it a bit to get it to distribute evenly to the two sides. Not a pain in practice, just something to be aware of.

Fill it up, wait 5 mins for the coil to prime, turn it on, select power level and puff. As the Teros has an air pressure detection circuit, you don’t press that button to fire, you just puff.

Even on my preferred low setting there was a good amount of vapour and surprisingly good flavour too. Warm vape on low, medium was ok but a tad too warm for me, high was very warm with massive clouds… too much for my taste. The mesh coil and mesh cotton combo seems to work very well.

I’m a DTL vaper, the Teros ONE provided a fairly loose MTL and it was possible for me to get a very restricted DTL vape, these observations are not objective ofc as it very much depends on what you want and are used to, but it’s definitely built for MTL.

The battery lasted me all day out and about on several occasions, but I am not a heavy vaper so ymmv. The fast 30 min to full charge is a plus in that respect.

I have not had to replace the pod in 2 weeks of daily use, which is a good thing as I only received one and they are not available in the UK yet!

The Teros ONE weighs 64.5g unfilled so is a little lighter than the Exceed Grip at 74g. There are 5 colours available, Moussaieff Red, Carbonado, Sapphire, Gold Diamond, Emerald Green. They all use multiple layers to create a soft colour reflective effect, it’s hard to photograph so check the link below for more details and images. 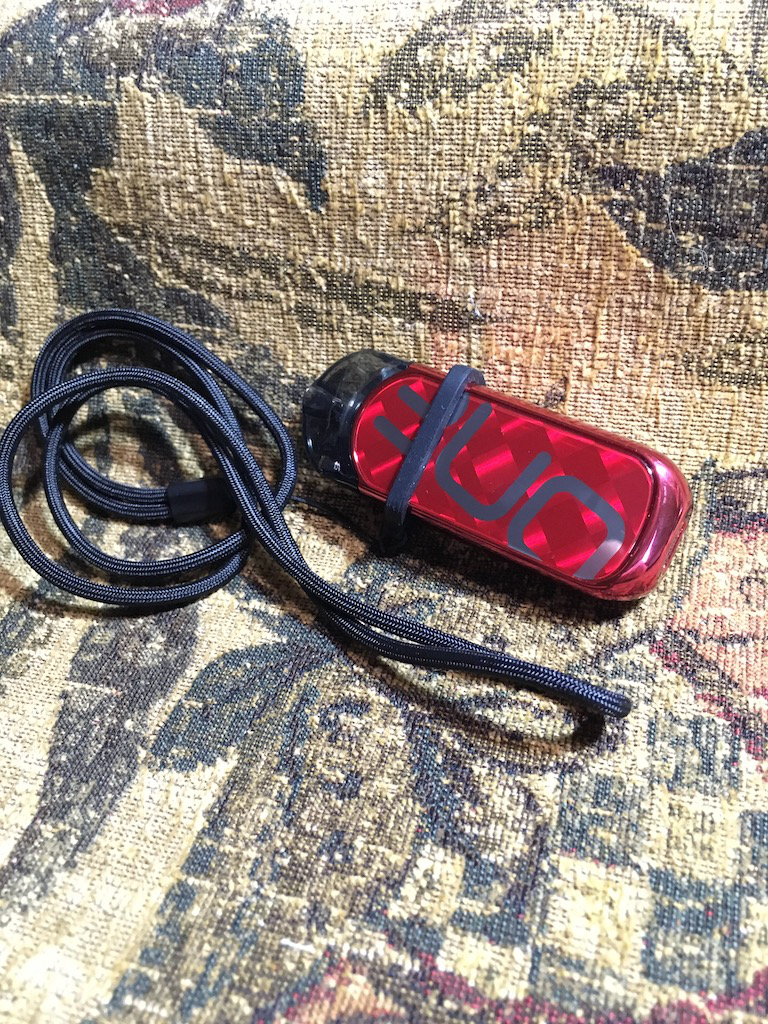 The supplied lanyard fits around the body of the Teros using a silicone loop and then goes around your neck, seems secure but it’s not my style so not used out and about. It easily fits in any pocket anyway.

Would I buy one?

If I needed another pod, yes. It’s small but tough, with no leaks or other liquid problems and has good flavour for a pocket sized no fuss system.

It’s released for sale now, according to the Joyetech online store it will be priced between $28.99 & £34.50 depending where you are. There are no details of cart prices at the time of writing, shame, I want some spares.

The Hall of Vape in Germany with Joyetech

5 signs You’ve made your preppy style

Good company of your coffee time

Teros ONE reviewed by Shone

Get Our Latest News

Subscribe to our newsletters to receive Special Offers
Promotions and News. Never miss out on a good opportunity.