Vaping and lung disease in the US: PHE’s advice

What’s happening in the US?

Since mid-September, headlines around the world have warned about an outbreak of serious lung disease across the US, said to be associated with vaping. As of October 22, 1,604 cases have been reported to the Center for Disease Control (CDC) from 49 US states, including 34 deaths.

The US has an estimated 9 million e-cigarette users in the country, but weekly updates on the CDC website make it clear that the group of people affected is very specific. The outbreak appears to be largely among young men: 70% of patients are male and the average age is 24. Almost half (46%) are under 21.

Dr Dana Meaney-Delman, head of the CDC team investigating the outbreak has reported that “We’ve narrowed this clearly to THC-containing products that are associated with most patients who are experiencing lung injury. The specific substance or substances we have not identified yet”. THC is the main psychoactive component of cannabis and the CDC has said that the products identified are being obtained off the street or from other informal sources (e.g. friends, family members or illicit dealers). 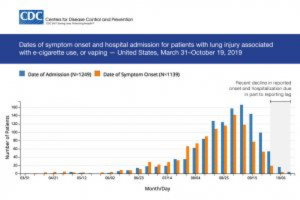 The specific chemical or chemicals that are causing the illness and deaths have not yet been identified and it is not clear that all cases are the same kind of injury. The outbreak does not appear to be associated with long term use of nicotine e-cigarettes, which have been used in the US for over 10 years. The first case was reported at the end of March this year and along with all the other cases appears to be linked with very recent use causing a rapid harmful effect.

Because of what’s happened, several US states have banned the use of flavourings in e-cigarettes and have called for urgent action.

Our concern is that the responses we have seen to the problem in the US and in other countries may increase the already widespread misunderstanding about the relative safety of nicotine e-cigarettes, deterring smokers from switching and risk driving vapers who have switched back to smoking. There is a real risk therefore that such a reaction will mean people continue to smoke, which will undoubtedly put lives at risk.

Could it happen here?

We need to be clear about what this outbreak is and is not. It is not a problem linked to long-term use of regulated nicotine vaping products. If it were, we would expect to see a very different demographic profile affected, more typical of long term vapers.

E-cigarettes containing nicotine are more tightly regulated in the UK than in the US and our medicines regulator, the Medicines and Healthcare products Regulatory Agency (MHRA) is responsible for overseeing the tobacco regulations.

The main chemicals under suspicion in the US such as THC and Vitamin E acetate oil are not permitted in e-cigarettes in this country.

It’s also a similar situation across Europe, where there are similar restrictions on e-cigarettes as in the UK – under the European Tobacco Products Directive. No vaping related cases like in the US have been reported to the EMCDDA by its EU Early Warning System Network to date.

The illicit drugs market is global and it is possible that similar products to those in the US are available in the UK, which is why we are warning of this new and serious threat and continue to monitor carefully the situation in the UK.

PHE has not changed its advice on nicotine containing e-cigarettes: Smokers should consider switching completely and vapers should stop smoking.

We are as certain as ever that e-cigarettes are far less harmful than smoking, which kills almost 220 people in England every day.

The evidence still shows that vaping carries a small fraction of the risk of smoking. Using a nicotine-containing e-cigarette makes it much more likely someone will quit successfully than relying on willpower alone. But it’s important to use regulated e-liquids and never risk vaping home-made or illicit e-liquids or adding substances.

Vaping devices that do not include nicotine come under a different set of regulations, the General Product Safety Regulations. These are generally less stringent than the regulations covering nicotine containing e-cigarettes.

PHE advice on smoking and e-cigarettes

For smokers: You should stop smoking completely. Getting expert support combined with using an e-cigarette doubles your chances of quitting successfully. For the best way to quit read our advice

For people who vape nicotine: if you are still smoking, you should stop and switch completely to vaping, then come off nicotine when you are confident you won’t relapse to smoking.

If you have never smoked: Don’t vape.

For people who vape CBD: although CBD is less tightly regulated, if you experience symptoms or are concerned you should stop.

For people who vape THC: if you are vaping THC (or an unknown liquid which could contain THC) it can be hazardous. These are the products most implicated in the US outbreak. If you feel unwell or have any difficulty breathing after vaping THC, go to A&E and tell them precisely what the product was you were using.

We are monitoring the situation

We are keen to understand more about what is happening in the US, so we’re in regular contact with US federal agencies including the CDC, the Food and Drug Administration (FDA) and the National Institute on Drug Abuse (NIDA).

We are also working closely with our expert advisors on respiratory health and the MHRA.

The National Poisons Information Service records and analyses reports of poisoning. The rate of poisonings from e-cigarettes has remained stable. Cases of moderate or severe toxicity remain rare and associated with accidental and occasionally deliberate misuse and not with inhalation of nicotine.

We’re also continually updating the evidence on e-cigarettes. The government’s Tobacco Control Plan for England requires PHE to update its 2015 review of e-cigarettes and other novel nicotine delivery systems every year until the end of the current Parliament in 2022.

We are currently in the process of producing these reviews. The most recent one was published in February and focused on vaping prevalence and characteristics of e-cigarette use in adults and young people, and e-cigarette use in English stop-smoking services. The next review is due to be published in early 2020 and will include the latest analysis of use among young people.

We have updated our advice to the public, including on our FRANK website. We have not issued an alert to date. The evidence on the causes of the deaths in the US is not yet conclusive, the information has not reached the threshold to issue an alert and we continue to keep the issue under close review.

Cited from below link:

The Hall of Vape in Germany with Joyetech

5 signs You’ve made your preppy style

Good company of your coffee time

Teros ONE reviewed by Shone

Get Our Latest News

Subscribe to our newsletters to receive Special Offers
Promotions and News. Never miss out on a good opportunity.